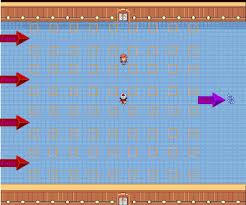 The Elite Four: After countless weeks, days, or hours, the greatest and possibly most difficult challenge you will face in your journey lies right in front of you. It is the only obstacle between you and the Champion Ash. No breaks and rest-stops in between, and if you fail, you're sent back to the beginning. In order to conquer such a trial, you must put all your skills you have developed up to this point to the test.

...or you can be a cheater and exploit a glitch.

Unfortunately, a fatal glitch would occasionally occur that caused the game to crash and freeze in a black screen when the Elite Four was defeated, rendering the game unplayable until it was reloaded. Sam created a patch which had to be manually selected in the SnD Games Pokemon Center. However, this patch would cause the game to assume that you have beaten the Elite Four, and as a result, allow you to pass. Don't think you can handle the Elite Four? Well, you're in luck. Simply follow the steps below.

2) Click your profile that is currently at the Elite four Stage.

Of course, there are certainly a handful of you that want to defeat the Elite Four yourselves, but simply cannot.

You know those annoyingly deadly Muks in Fuchsia Gym? They're back. However, they're not that big of a deal this time around. Just ignore them with poison-resistant Pokemon like Magneton and Venomoth (and Venusaur if you have one). Magneton should use Charge Beam to increase its Special Attack, then spam Discharge to paralyze and damage them. Venomoth should use Quiver Dance to raise its Speed (not that it matters), Special Attack, and Special Defense. Use Psychic for some super-effective hits. If you have Venusaur, it should use Bulldoze to slow the target down so that your other Pokemon can attack it. You could also use Slowbro, but be very wary of Muk's Gas attack.

DO NOT use Magneton in Bruno's room. Slowbro is your best friend here, just be wary for the occasional Thunderpunch from Hitmonchan. Venomoth can take out the other fighters with Psychic, just be careful when dealing with Onix's Rock-Type moves and Hitmonchan's Fire Punch. Your starters work as well, although, again, Hitmonchan is your biggest threat.

Lance is probably the most difficult out of these four guys, but use the above tips and you should be fine. Two Gyarados will come out. Use Magneton and Dragonite, but with Dragonite, make sure that he heals constantly with Rest. Dragonairs also come out. Whatever you do, DO NOT LET YOUR DRAGONITE FAINT. This is crucial! Your Dragonite must live unless you have a Blastoise. Very carefully take out the Dragons in the next few waves. Once again, do not hesitate to use Rest. Next up, an Aerodactyl. Use Slowbro and Magneton (and Blastoise if you have one) to dispose of it. Then there are two big Charizards. Use your Slowbro or your Nidoking (that is, if you chose to use it). Then the Big Boss Dragonite comes. Use Blastoise's or Dragonite's Ice Beam to freeze this guy while doing massive damage. It would really suck if you died now, so be careful.

Retrieved from "https://theclanofechoes.fandom.com/wiki/How_To_Defeat_Elite_Four?oldid=9344"
Community content is available under CC-BY-SA unless otherwise noted.